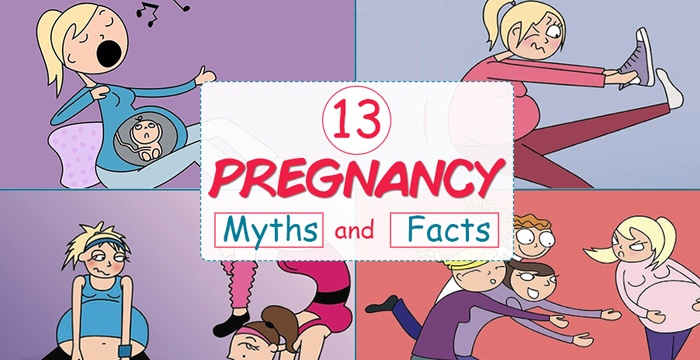 Pregnancy is a time of excitement and anticipation, and mothers-to-be are often brimming with questions, many of them, unfortunately, based on myth and superstition. If I drink coffee during my pregnancy, will my baby be born with brown spots? Can looking at a lunar eclipse really cause a deformity in my child? There are countless myths, superstitions, and old wives’ tales about pregnancy, many of them wonderfully misleading and yet actually believed and perpetuated. Nine remarkable ones are presented and debunked here.

Myth: Eating peanuts and dairy can make your baby allergic to them

Truth: It’s perfectly safe to eat these foods unless you yourself are allergic to them, or if your doctor advises you not to. There is no evidence that cutting out some foods will prevent your baby from being allergic to them, but limiting your diet not good to your baby as you might not get all the nutrition you need. There are some foods that it’s best to avoid during pregnancy due to the risks in certain microbes. They include some soft cheeses, patés, raw meat or fish, raw or partly cooked eggs, and soft-serve ice cream.

Myth: There are ways you can tell if it’s a boy or a girl

Truth: The position of the baby in your tummy, holding a wedding ring over your abdomen and watching in which direction it turns, or how active the baby is, are all ways you may have heard to tell if you are having a boy or a girl, but none of these methods works. The Non-invasive prenatal test (NIPT) is a test available after 10 weeks that can reveal the gender of the baby. In many cases, an ultrasound scan can also let you know the gender of your baby. It isn’t 100% reliable, but you can ask the ultrasound technician to tell you what they can see. You can also ask them not to tell you if you want to wait until the birth to find out.

Myth: I should be ‘eating for 2’ while I’m pregnant

Truth: There is no evidence to show that you need to eat for 2 when you’re pregnant. How much extra you need to eat depends on your weight and height, how active you are and how far into your pregnancy you are. But, in general, most women should only eat about 350 to 450 additional calories per day while they are pregnant. That’s a couple of extra healthy snacks like fruit, a hard-boiled egg or a berry smoothie. Overeating is bad for both you and your baby. Eating a healthy, balanced diet is what’s important.

Myth: I shouldn’t have hot baths, dye my hair or exercise while pregnant

Truth: It’s perfectly safe to have a warm bath when pregnant, but avoid becoming too hot. During pregnancy, hormonal changes might make you feel warmer than normal. You should avoid spa baths as they can raise your core body temperature, which could lead to overheating, dehydration or fainting. The low level of chemicals found in hair dye is generally thought to be safe. However, many women still prefer to avoid dyeing their hair in the first 12 weeks of pregnancy. If you dye your hair, you can leave it on for as short a time as possible, or use semi-permanent vegetable dye. If you are a hairdresser, make sure you wear gloves when using hair dye and work in a well-ventilated space.

Most exercises that you did before pregnancy will be safe, but check with your doctor or midwife. If your pregnancy is uncomplicated, you should aim to exercise for an average 20 to 30 minutes, 4 to 5 times a week. Avoid exercises that put you at risk of a fall, such as horse riding, skiing or cycling. You might find you become breathless or feel hot more quickly during pregnancy. As a general rule, a light to moderate level should allow you to hold a conversation as you exercise when pregnant. If you become breathless as you talk, you’re probably exercising too strenuously.

Myth: I can’t have a cat in the house when I’m pregnant

Truth: There is no need to give away your pets when you become pregnant. However, there is a disease called toxoplasmosis that can be not good to your unborn baby, and you can become infected by handling cat’s faeces. Ask someone else to change your cat’s litter, or wear gloves to do this — as well as when gardening — while you are pregnant.

Truth: There is no evidence that creams or oils can remove or prevent stretch marks, which often fade in time.

Myth: It’s unsafe to hang washing on the line

Truth: Reaching up above your head and hanging washing on the line is safe. It is unlikely that it will affect your baby’s umbilical cord in any way. Your midwife or doctor will advise you if there are any activities that are unsafe for you in pregnancy.

Myth: I need to prepare my nip-ples for b-feeding

Truth: There is no evidence that you need to prepare or toughen your nip- ples before birth.

9. Give up the spice

Myth also suggests that spicy foods eaten during pregnancy can burn the baby’s eyes, resulting in blindness. Spicy foods also have been blamed for miscarriages and the induction of labor. While those associations might sound plausible to some people, they aren’t real. Spicy foods can increase a pregnant woman’s risk of however. Repeated during pregnancy may mean that the baby will be born with a head full of hair, if we are to believe another old wives’ tale.

In certain cultures, superstition advises pregnant women to avoid stepping over ropes while pregnant, since doing so could result in a nuchal cord, in which the umbilical cord becomes tangled around the baby’s neck. In the modern era, the myth has been extended to include electrical cords. Myth also recommends against raising the arms above the head while pregnant, as this, too, could result in a nuchal cord. There is no scientific basis for any of those myths.

Among the more firmly entrenched superstitions of pregnancy is the notion that the frequency with which babies are born increases during a full moon. Even some medical staff who work in labor and delivery wards believe this one, possibly reinforcing in the popular mind the plausibility for an actual connection. Despite extensive investigation, however, scientists have yet to identify an association between full moons and birth rates.

An old wives’ tale that exists in several cultures suggests that when a pregnant woman looks at an unpleasant or ugly animal, her baby will take on a resemblance of that animal. There is no evidence to support the idea, and more importantly, babies simply cannot be ugly.

According to myth, girls take away their mothers’ beauty. By contrast, if a pregnant woman grows more attractive through her pregnancy, she can thank the little boy in her womb. Of course, the truth of the matter is that morning sickness, changing hormone levels, and an expanding baby leave many pregnant women exhausted and plagued with acne, especially in the first trimester. So, at the peak of beauty, expecting women generally are not. And that stands regardless of whether the baby is a girl or a boy.

KINGKONG KICO – I’m on week 30 pregnancy and I drink 200mg of coffee. I been trying to cut it out but then I get bad caffennie headache.

Laurin Kohler – So far, I have not been able to cut out caffeine. It’s my biggest difficulty right now.

Rachel Smith – I’m getting the indigestion and shortness of breath at 20 weeks pregnant and there’s no possible way for me to digest extra calories I have a hard enough time getting a normal recommended daily intake for a woman. I’m not really concerned cause the baby is healthy but it is pretty annoying lol

kinga – my aunt was pregnant and turned out to be allergic to cats. she never have any symptoms, pre during or post pregnancy, so there was no way of knowing. she ended up loosing 2 hours after being born