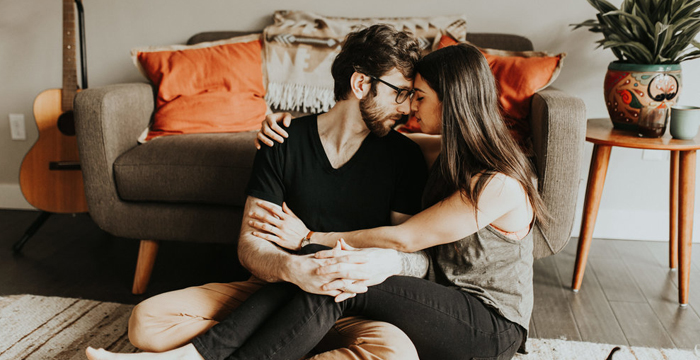 Women like to rush into things and start planning their dream wedding long before they’ve found their beloved Prince Charming. It’s a bit different for men as they start thinking about settling down only after they’ve found their one and only. So how do you know if he’s ready to tie the knot or at least move in together? There are certain signs that indicate that he’s totally fallen for you and can’t think about anyone else beside him. Men aren’t very good with talking about their emotions, but what they are good at is acting upon them. Here are 12 sure signs your boyfriend wants to spend the rest of his life with you.

1. He’s planning his life around you

You don’t turn down faraway jobs just because a woman is a good cook. If he’s trying to stay as close as possible to you, it’s a sure sign he wants you to be in his life for good. If you haven’t moved in together yet he’s probably already started talking about it. The more serious he is about you, the better!

When a guy often talks about you doing things together as a couple, it’s a sure sign that he sees the two of you spending a lot of time together. In fact, he’s probably thinking about spending the rest of his life with you! This means he perceives both of you as a single entity and his bachelor days are far behind. It’s one of the best signs ever!

3. He doesn’t mind spending time at home together

It’s good when you can have fun with your boyfriend, but what really matters is when the two of you can get all at home and still spend great time. You might not live together yet, but you already have your stuff stashed away in his apartment and you enjoy each other’s company while doing grocery shopping, cooking dinners, and watching movies.

4. He’s with you even when things aren’t going too smooth

If your man is not afraid to be around when you hit rock bottom, it’s a sure sign he treasures you more than anything. It’s easy to be together when all is well, but sticking through the rough patches requires some serious care and devotion. This means the two of you can overcome any trouble together, and that’s more than any of us could ask for.

5. You buy something together

Whether it’s a dog, a gadget, or a new house, buying things together and sharing responsibilities means you’re in the relationship for a long time. First you bring up a dog together and then, who knows, maybe you’ll have kids, too?

6. You are part of his family

If you’ve reached that stage of relationships when you are expected to show up at his family gatherings, you’re doing something right. We often miss that moment when we basically become part of the family, overcoming the awkwardness of meeting his mom and dad for special occasions. Hey, now you probably meet them just to have fun together, just like you do with your own family!

Some people say that opposites attract, but in the long run it’s best if the two you share at least some hobbies together. It’s so much fun when you can watch movies, go to yoga, enjoy photography, and maybe even work together on some creative project! Common interests bring people even closer to each other, so if he’s into the things you love – you’ll settle down together just fine!

8. He’s trying hard to become part of your family

You may have befriended his relatives, but it doesn’t mean a thing if he’s not doing the same with your parents and siblings. If your boyfriend stays in touch with your family and likes to have a chat or two with your dad about some sports event, it’s a sure sign he loves you and wants to be part of your life for years to come.

Whether it’s been six months or a few years, he’s still trying to surprise you and bring a smile to your face. Routine can be bad for relationships, so it’s important to keep things fresh and never forget about romance that brought you together in the first place. That’s why he’s trying hard to plan exciting dates and breathtaking getaways for the two you!

A guy talks about having kids only if he’s 100% sure he wants to spend the rest of his life with you. Otherwise he wouldn’t be comfortable to bring up this topic! Whether he does it jokingly or you spend a whole date talking about what it would be like to move in together and start a family, conversations like this bring you one step closer to relationships each and every woman dreams about.

It’s always good to live together for some time before you tie the knot or simply realize that you can’t live without each other. So if you’ve already entered this stage of your relationships – congratulations! This means you are one step closer to spending your whole life together (or at least to understanding whether this is your cup of tea or not). If he was the one who came up with the idea to move in together, it’s a sure sign he thinks you’re his one and only!

As vague as it may sound, thinking about other person’s happiness is one of the most vivid displays of love and affection. If he likes to talk about your wellbeing and long-term life goals, you can rest assured that he’s planning to spend as much time with you as possible. Guys don’t take these things lightly!

Jennifer Hobbs – Great checklist! Sometimes you thinks he’s sure, other times it makes you wonder.

Violet Taboola – I’m not sure that moving in with a man before he marries you would be advisable. Men tend to delay marriage prospects when you cohabit with them. The relationship becomes lax and the idea of marriage becomes delayed. I would refrain from living together before he puts a ring on it.

Camille Hernandez – He always talks about us being together and get married hoping and praying to become his wife.! I so look forward to take care of him been long time since had someone in my life so do love him!!!

This Article Was First Published on herbeauty.co