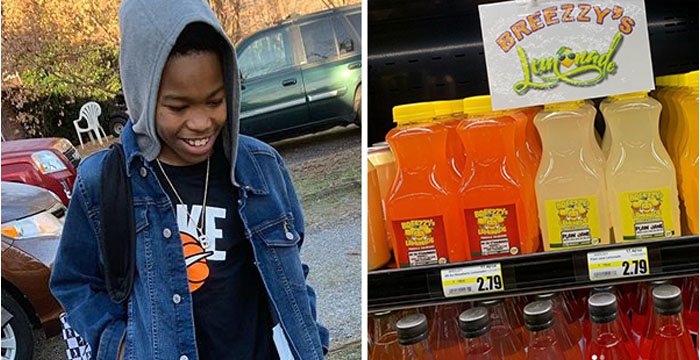 Aubrie Green, an 11 year old entrepreneur with autism, is the founder and CEO of his own lemonade brand called Breezzy’s Lemonade. Available in several flavors, his products are already being sold at a local grocery store in his hometown of Richmond, Virginia. It all started one day when Aubrie sent his mother, Ceydria McCray, a picture of a lemon squeezer for sale at Bed Bath & Beyond on a discounted price. He told his mother he wanted it and so she bought it. Since then, Aubrie went on to create his own lemonade recipe.

Some of Aubrie’s first patronizers were his mother’s workmates. His mother would take samples to the office and it instantly became a big hit. She initially brought cups, but the demand increased to gallons that she eventually had to bring pouches and then jugs. That was when they decided to take it a step further and started selling Breezzy’s Lemonade on Instagram. Aubrie’s special lemonade then caught the attention of The Market at 25th, a grocery store in the community, who offered to put his bottles on their shelves. Aubrie has since added a variety of flavors such as Plain Jane, Grade-Ade, Tango Mango, Striker, and Dragonfruit. Customers love the products so much that it’s almost always sold out.

“It’s a really fast moving product and people want it. It was really impressive when it first came in and people were coming in asking where it was, but it was already gone,” Derek Houston, business analyst at The Market at 25th, told ABC 8 News. Aubrie has really become very passionate about what he’s doing. Initially however, creating lemonade was just something therapeutic for him to do. He still enjoys rolling every lemon before squeezing it and storing it to the bucket, his mother said. “It’s wonderful to see kids like Aubrie grow. They’ll say autism, they’ll think it’s a disability. Every kid excels in different ways,” his mentor, Earl Hughes said. He believes that the business is even helping him overcome Autism.

This Article Was First Published On blackbusiness.com